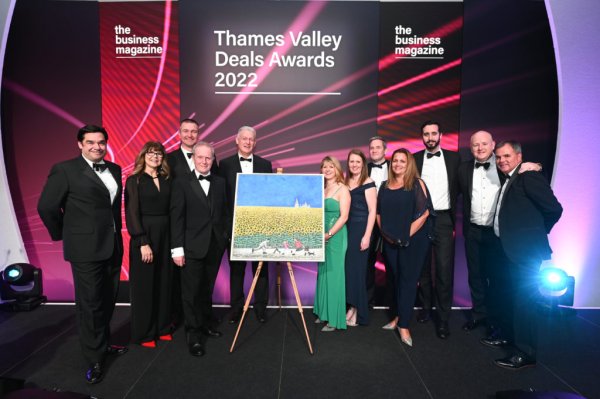 “It was an honour to witness the live auction of the painting donated by Paul in order to raise money for the Ukrainian people.  After an exciting bidding war between two companies, we were absolutely delighted that the painting raised a huge £10,000 for the charity.  An artist always finds it challenging painting a commission, especially when the narrative is so important, but Paul got it just right.  His painting is a message of hope, beautifully painted in his unique recognisable style in the colours of the Ukrainian flag.”  The title of the painting is profound.

A field of hope,

Of all the love,

Of family, once again whole.

And when the storm clouds have receded,

And the sun can shine once more,

The sunflowers will rise defiant,

No less tarnished by the war.

We are delighted to be invited with Paul Robinson to a charity auction organised by The Business Magazine in aid of Ukraine.

The original oil painting by our very own Paul Robinson will be auctioned at The Business Magazine's Thames Valley Deals Awards this evening for the second part of the auction. Mark Durden-Smith will be hosting the live auction. The first part of the auction has so far raised £5,000 for the Disasters Emergency Committee and Ukraine.

The 30 x 30 square inch oil on canvas features a family reaching out for safety while behind them Ukrainian sunflowers stand tall, defiant against the looming threat. Paul Robinson commented “I felt honoured to be asked by one of my collectors to create a painting which would be auctioned to raise money to help the people of Ukraine.”