Stunning, is a word that comes to mind when first encountering the work of William Balthazar Rose, after which every adjective one can think of comes into play. A man of many parts - painter, teacher, prize winning architect, visionary, William Balthazar Rose's, largely symbolic paintings, literally take the breath away.

Brian Sinfield writes about William's exhibition 'Celebration of the Cupcake'.

There is something darkly medieval yet dreamlike in William Rose’s paintings, but there is also humour.  Rose uses and adapts the work of other artists of the past - Picasso, Balthus, Morandi, Cezanne and Titian to fill his compositions and then injects them with his own brand of mystery.  Each painting is  rich with symbolism, each has a narrative, often frightening but never dull.

Rose says of his celebrated series ‘Cooks’, “These paintings are humorous and at times terrifying.  I introduce the cook as the tragic-comic hero and demagogue though he is often all too brutally human”.  They reflect our current obsession with celebrity.  Of the ever-popular cupcake, which William has introduced into a number of his cook paintings, he says: “I sometimes think of a cupcake as merely a cupcake or sometimes, perhaps, as a symbol of the heart”.   In his series, ‘Carnivals of Night’, William’s paintings are  immensely powerful with images that appear to be dragged from the turmoil of ancient Europe.  In addition to these, and almost as a counterbalance, William's still lives are imbued with a quite tonal beauty.

William was born in Cambridge into a family of intellectuals and artists. He had a home in  in Sansepolcro, Tuscany for several years and has exhibited widely in Italy. He was educated in America where he received a Masters from Princeton University. He later taught at both Princeton and the University of California, and practiced architecture at leading firms on both coasts.  He returned to Europe at the age of 30 in the early 1990s and now lives in Italy with his family. 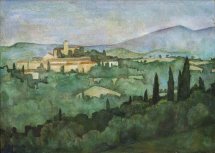 A Cupcake from Venice

Even a Dog Will Eat One

What a Mess (it was a Birthday Cake) Presentation of the Cake Painter and the Wheel