Perhaps the greatest of all Welsh artists, Kyffin Willims, who died in 2006 aged 88, was born in Anglesey, North Wales, and studied at the Slade School of Art, London 1941-44.

He was represented for many years by the Leicester Galleries in London. In 1968 he was awarded the Winston Churchill Scholarship to record the Welsh in Patagonia, following it up with a book about his experiences. He also wrote an autobiography Across the Straits. He was elected RA in 1974 and was awarded an OBE in 1982.

Apart from his delightful and keenly observed drawings of working dogs and country people, he is best known for his powerful paintings of the Welsh mountains, achieved with bold impasto laid on with a palette knife, which perfectly captured the rich, but often bleak Welsh landscape. 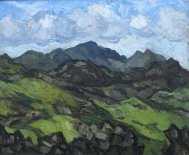 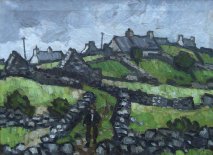