Phil paints colourful abstracts and figurative art in acrylic, primarily on canvas and board. He admires the work of Gerhard Richter and Jackson Pollock, and their influences appear in a number of his paintings.

These paintings form part of his ‘Morocco’ series, inspired by travels. The overall effect of Phil’s work takes the viewer on a visual experience through a colourful Moroccan town from a two-dimensional perspective. The colour palette in ‘Morocco I’ is influenced by reds and oranges from spice stalls in Moroccan souks and tribal rugs. ‘Morocco II’ draws heavily on the colour palette of a beautiful town called Chefchaouen in the north of Morocco, where all buildings are painted in various shades of blue.  Abstracted versions of the red carpets sold there are visible, and the orange cone is an abstracted version of a spice stall selling paprika.  Numerous arches with rectangular marks are reminiscent of doors and windows

Phil has been painting since 2006 from his studio in Devon. His work can be found in private and commercial collections throughout the UK and locations overseas including ‘Friends of the Earth' in Berlin, New York, Florida, California, Toronto and Rome.

Prior to painting Phil spent his professional career as an estuarine and marine biologist conducting ecological surveys to protect the environment. 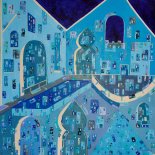 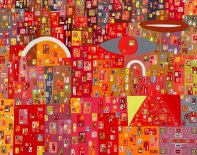 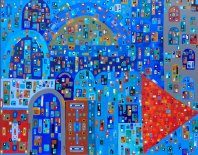 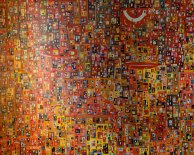