Peter Samuelson was something of a recluse. He was a natural figurative artist who drew or painted throughout his life, but he shunned the world of art galleries and dealers. As a consequence his work has remained little known.
For twenty years he concentrated more on restoring antique rugs than painting, though he still drew virtually every day. It wasn't until the mid 1980s, largely due to the industry of two of his friends, that he began to paint portraits again. They organised a number of exhibitions in London, culminating with a retrospective at the Roy Miles gallery in London's West End. When he died he left the bulk of his work, hundreds of watercolours, drawings and paintings, to family and friends. From these sources has come most of the artist's work handled by this gallery over the past few years, including two exhibitions of paintings from the 1940s to the 1960s
He was born in Salisbury and grew up in Canterbury. He briefly went to Eton and later moved to Paris where he enrolled at the New York School of Fine and Applied Arts. He later helped his mother run a boarding house in Torquay. It was the young working men and women of the 50s and 60s who passed through this and later through his own establishment in London that provided the subjects for most of his paintings. 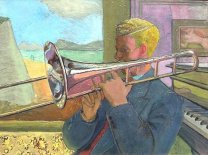