Peter considers himself a documentarian and expressive landscape artist creating oil and mixed media paintings by immersing himself in the landscape. He paints from his native Wales as well as Scotland and other remote regions of the world, including a series of paintings made in the Himalayas.

He incorporates journalistic narratives and social geography into his projects recording elements and nuances of the space to rework into ambitiously scaled and expressive paintings; using paint and other media poured, rubbed and splashed onto the canvas. Having worked exclusively in oils, his technique has broadened to the use of gesso, collage, inks and shellac. His paintings give the impression of well-worn exterior walls, buffeted and corroded over time. The effect is a characterful, well weathered surface, stony and granular that is at the same time luminous with dramatic light. His paintings go through a number of stages, deconstructed and layered, to form a complex expression of his subject matter.

Peter now lives and works in Bristol, maintaining his travels to his native Wales and across Britain, which remains a continual spur for his work.

He is a Fellow of the Royal Society of Arts (FRSA) and the Royal Cambrian Academy (RCA) and has featured on the BBC News.  The Guardian published an article as he was the 'One to Watch'. His work his held in private collections in the UK and overseas. 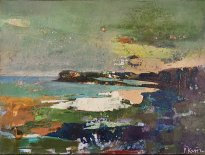