Paul was born in Penrith, Cumbria in 1959 and studied Fine Art at Carlisle College of Art.  After moving to London he became a successful illustrator working for many well-known publications. The artist's move from London to Norfolk in 1999 saw a dramatic change in his work as he discovered a whole new world of country towns, green hillsides, stormy seas and lots of space, a complete contrast to the cityscapes of London.  His style is instantly recognisable and his paintings are becoming more and more collectable.

Paul explains about his London paintings: "When it was suggested making some London paintings, the timing could not have been better – in fact it was music to my ears. By coincidence I had already been working on some paintings of the River Thames, and as I completed each one, the impetus to produce more was growing. Painting London again after having left there more than twenty years ago has been a voyage of rediscovery for me; old haunts that seemed to have changed very little, and others that are now unrecognisable. But bringing back that sense of place has been very important in producing these paintings – without that feeling and those memories, they would be meaningless. In the midst of producing this body of work, Coronavirus arrived and not surprisingly, this had a strong effect on my attitude to how I was approaching my London subjects. Some of the paintings such as that of Oxford Circus and ‘West End Girls’ were completed before lockdown. But as time progressed, and I began to acclimatise to this situation, my work started to show my feelings about the effect that lockdown was having on me and no doubt us all. As an artist, I am used to being in isolation, but seeing the empty streets of London over such a long period of time has left a strong impression of a city in lockdown and in particular, how the world suddenly looked without a blanket of pollution." Paul Robinson

Tracks coming and going in the snow, the moon is full and all aglow 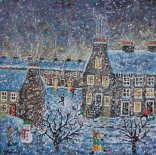 Glowing Light on a Snowy Night

What could be nicer than flying a kite 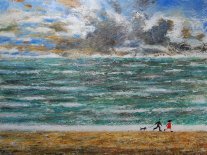 Lizzy and Brian love to walk, regardless of the weather. But last week in the wind she lost her hat, now her hair is a shamble, which is spoiling her ramble.

Off to the Proms 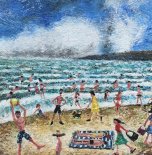 Catch of the Day

Oh, If I Only Had Time

It's nice to stand and ponder, and watch the world go by. I wish I had a coat like that, Rose whispers, with a sigh.