Michael's work shows a strong imaginative streak, quirky at times, surreal at others.  Working in acrylic, he tends to work on themes - gardens, chateau’s, coastal scenes and cityscapes, whatever subject holds his interest.

His paintings are highly distinctive and possess an unworldly, surreal quality with a playful sense of mystery, occasionally bordering on the abstract.  Whilst, of course, Michael's work is defiantly uniquely his own, perhaps it is the artist's fascination with Alfred Hitchcock that has laid the foundation for his work.  Michael says "I love the odd and quirky feeling you get in his films, something sinister or mysterious which helps move the plot along.  I quite like playing with different perspectives - it's not about perspectives, it's more about perception, which is the way you see it rather than the way it should be".

Michael Kidd was born in London in 1937.  He studied at Wimbledon School of Art where he gained a scholarship to the Royal College of Arts in the late 1950s.  Fellow art students included the film director Ridley Scott and artist David Hockney.  He started his career working as an art director in some of London's leading advertising agencies and spent some years in America. On his return he began directing TV and cinema commercials in Europe, the US, and the UK, working, among others, for British Airways, Coca Cola, Lloyds, Barclays Bank, and Ford Motor Company, and won many awards.

He gave up directing to become a full-time artist in 1981 and held his first solo exhibition in Mayfair in 1997, and since has devoted all his time to painting. 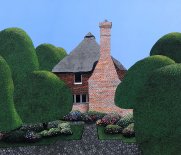 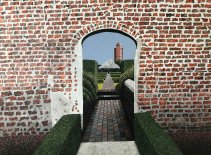