The son of artists, Kurt Jackson MA (Oxon) DLitt (Hon) RWA was born is 1961 in Blandford, Dorset. He graduated from St Peter’s College, Oxford with a degree in Zoology in 1983.  While there, he spent most of his time painting and attending courses at Ruskin College of Art, Oxford. On gaining his degree he travelled extensively and independently, painting wherever he went. He travelled to the Arctic alone and hitched across Africa with his wife, Caroline.

They moved to the most westerly town in Britain, St Just in Penwith, Cornwall in 1984 where they still live and work. They have three grown children and seven young grandchildren.  In 2015 they set up the Jackson Foundation Gallery in Penwith providing a space, open to one and all, to reflect on our symbiotic relationship with the natural world, and the rewards to be found by taking a step back and looking around - to see the world through Kurt Jackson’s eyes.

A dedicated environmentalist and true polymath, Jackson’s holistic approach to his subject seamlessly blends art and politics providing a springboard to create a hugely varied body of work unconstrained by format or scale.

Jackson’s artistic practice ranges from his trademark visceral plein-air sessions to studio work and embraces an extensive range of materials and techniques including mixed media, large canvases, printmaking, the written word and sculpture.

Jackson’s focus on the complexity, diversity and fragility of the natural world has led to artist-in-residencies on the Greenpeace ship Esperanza, the Eden Project and for nearly 20 years the Glastonbury Festival, which has become a staple of his annual working calendar.

Over the past thirty years he has had numerous art publications released to accompany his exhibitions.  Regularly contributing to radio and television he also presents environmentally informed art documentaries for the BBC.  He was the subject for an award-winning BBC documentary, ‘A Picture of Britain’. 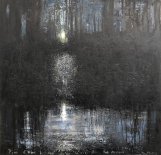