Jonathan Sainsbury is a well-known British wildlife artist, born in 1951, whose prize-winning paintings of the natural world hang in wildlife and contemporary art exhibitions and in public and private collections throughout the world.

Jonathan grew up in Warwickshire, always surrounded and fascinated by Nature, then trained at the Byam Shaw School of Art and Leeds College of Art, where he developed skills of drawing and observation and translating ideas into images. After graduating he began painting for a living, quickly winning critical acclaim and commercial success for his wildlife and sporting subjects.
He combines a profound knowledge of his subject-matter, which is British landscape and flora and fauna, with a desire to communicate through it. For him, Nature is a source of interest, inspiration, meaning and comfort, accessible to all. 'Everything we are is reflected in Nature and I wish to paint nothing else,' he says.

Over the years Jonathan has amassed a large collection of notebooks filled with tiny pencil sketches that are both observations and ideas for pictures. He has created a technique combining watercolour and charcoal that enables him to capture a sense of movement, particularly in birds, the most fleeting of his subjects. He brings a watercolourist's approach to oils, too, painting in layers of glaze and pigment as the Old Masters did, to convey mood and atmosphere.

As a student he worked large-scale in the Scenery department at the Royal Shakespeare Theatre and travelled in the Far East aided by the World Pheasant Association, to study pheasants in the wild. As a teenager in the sixties, he was concerned for environmental issues. From an early conceptual piece, 'Tiger Bricks', a framed assembly of bricks painted with stripes weighing the same as the Javanese tiger that had just been declared extinct, to the combination of endangered species like 'Brown Hares and Corncrakes', and 'Dodo and Grenada Doves' in his recent Square Series, Jonathan speaks with a prophetic voice for the natural world.

People from all backgrounds are drawn to Jonathan's work. He shows subject-matter that is deeply familiar, often creatures in their own environment, or interacting with man-made features, or in poses stripped of background to emphasise gesture and pattern. His constant search for fresh ways of telling these stories stirs a thoughtfulness in the viewer.

Jonathan lives in Comrie, Perthshire. He is married to Kate and they have two daughters and a son and a tame starling 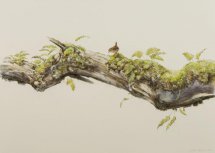 Wren on an Oak Branch

Watercolour and charcoal on paper 71 x 101 cm
‘Jonathan has shown us this old branch, which so many people would walk past and never notice. He has shown it with such an eye for its shape and its twist; he has noticed the shadows and the bleached wood; he has seen it as a microcosm that represents the whole world for creatures far smaller than us; he sees the lichens that grow in it as a food store for tiny birds, like this wren. There is even a fine spider’s web in the painting. He sees this old branch, starting to rot and break away from the tree, its life coming to an end, as the supporter of new life for plants and animals. He sees that all things have a time and a season, that everything is interconnected. This is his vision.’
£3,200
Enquire about this item
Add to Wishlist
Join Our Mailing List