Born in Manchester in 1951 James moved to Glasgow with his family at an early age, where he continues to live and work. The surrounding area of urban landscapes and play parks of his childhood together with a fertile imagination are prevalent in his paintings.  Once a painting has begun he allows time for it to develop, and by adding foreign elements he hopes to provide a spark which in turn will heighten and amplify the atmosphere, allowing a sense of mystery and drama.  James remembers being very moved by the paintings of Georgio de Chirico that he began to study and learn the techniques of this master, an artist he greatly admires.

James is a regular contributor to the Royal Glasgow Institute and was elected to RGI of Fine Arts in 2016. 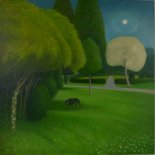 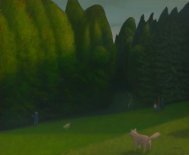 Quite Early One Morning

Oil on canvas board 45 x 56 cm
£1,500
Enquire about this item
Add to Wishlist
Join Our Mailing List