“Trying to describe Felice Hodges’ wonderful paintings with accuracy can be difficult because – like the truest art – they transcend the harsh rigidities and conformities of language. She makes paintings that may first appear wholly abstract and gestural in expression but, on continued looking, are generally rooted in a specific place or moment which their titles and forms gradually reveal. They hover between abstraction and the mysterious, transformed poetic reality that the viewer becomes immediately caught up in and a part of, and the viewer becomes part of an interaction or dialogue with the picture itself. The evocative mood and atmosphere of these paintings is often suggested by subtle, ravishing harmonies of colour. Tones and colours are laid next to, or over each other, to create highly original and unexpected chromatic combinations which are also intensely beautiful. These have a direct effect on the viewer’s emotions.

Felice trained as a musician and continues her musical interests and in this her work is reminiscent of the tone poems of Claude Debussy and Maurice Ravel. Such music is ethereal and free flowing, intangible, yet contained within a highly effective structure. Felice’s paintings have a similar enigmatic character. The surface of these canvases is highly, richly complex, also like a musical composition.

Felice contrasts the different textures and effects that derive from working paint with stiff and soft brushwork, bold gestures set against more contained ones. She combines acrylics with other media, and sometimes the paintings contain collaged elements.

I am reminded of another painter, James McNeil Whistler who, … suppressed narrative in favour of evoking in his viewers delicate yet penetrating emotional states. Felice’s expressive approach to painting and perception is one that enriches all who see it.”

Off White and Grey 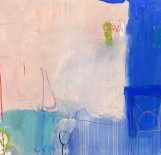 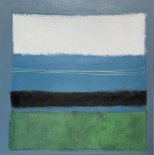 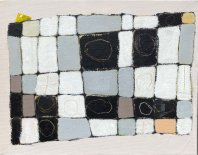