A highly respected and influential artist, Elizabeth Blackadder was born in Falkirk, Scotland She studied at Edinburgh University and Edinburgh College of Art 1949-54. Awarded a Travelling Scholarship in 1954 she visited Yugoslavia, Italy and Greece. She was strongly influenced by Byzantine architecture and mosaics. She was at her most original in her large watercolours of flowers, though she also painted other subjects in a semi abstract manner.

She exhibited in London and overseas and taught at Edinburgh College of Art 1956-1986. Her work is represented in the Tate Gallery and major public collections in Scotland. 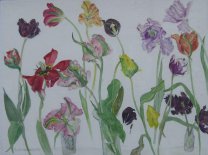 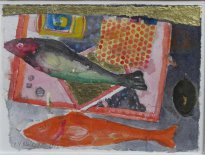