Born in Huddersfield, Yorkshire 1959, Ann studied painting at Canterbury College of Art and Design graduating in 1987 with a BA Honours Degree in Fine Art.  The following three years she rented a studio in Faversham where she continued to practice.

After a three month trip around Spain, Ann based herself in London, working part time as a gardener to support her painting and extensive travels to Nepal and India.  During this time her work was accepted on several occasions into the Royal Academy Summer Exhibition and the Discerning Eye Exhibition, the New English Art Club and the Royal Society of British Artists at the Mall Galleries, London. In 1998 she settled in London, rented a studio in Parade Mews, Tulse Hill, exhibiting her work with various galleries around the country and had a Solo Show in Bergen, Norway at Gallery Urd.

In 2006 Ann relocated to West Penwith in Cornwall.  She was invited by selector Fred Cuming RA to exhibit six paintings in the 2008 Discerning Eye Exhibition and won the Regional Prize for the West Country, the same year a painting was accepted into the Royal Academy Summer Exhibition.  In 2009 her work was selected for the Royal West of England Academy Exhibition and was included in a guided commentary about the exhibition.

Working predominantly in oil on linen or board, Ann's painting is a direct response to her environment inspired by daily walks in the ever-changing elements of the Cornish landscape or by the quiet contemplation of flowers and everyday objects around her.

To view all available paintings by Ann please click here 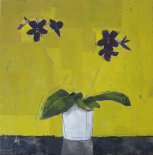 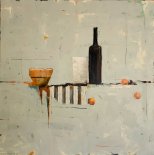 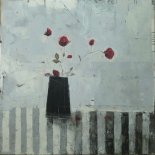 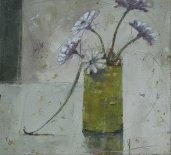 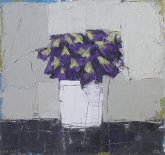