The essence of Anita Mandl's sculptures is simplicity of form. The surface of all her work is highly polished, eliminating extraneous detail and bringing out the beauty of natural materials. She produces carvings in ornamental hardwoods, alabaster, soapstone and marbles, and then they are subsequently cast in bronze. Nothing is cast unless it is carved first.

She was born in Prague and came to England in 1939. She trained as a zoologist at Birkbeck College, University of London (B.SC Gen 1946; First Class Hon, Zooll. 1947) Later she joined the staff of the Medical School in Birmingham University (1948-1965). She was awarded a Ph.D in 1951 and a D.Sc in 1960. During this period she attended evening classes in sculpture at Birmingham College of Art. In 1965 she married and gave up her University Readership. Since then she has concentrated on sculpture.

In 1967 she was elected Associate of the Royal West of England Academy, becoming a Full Member in 1978. From 1976 to 1988 she was an active member of the Devon Guild of Craftsmen. In 1971 she was elected a sculptor member of the Royal Society of Marine Artists (resigned in 1994). In 1980 she was raised from Associate to Fellow of the Royal Society of British Sculptors. Her work has been exhibited widely both in this country and overseas, and she has shown at the Royal Academy on eight occasions.

Bronze Ed 3 of 6
Add to Wishlist 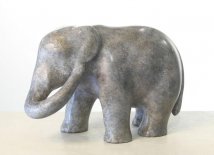